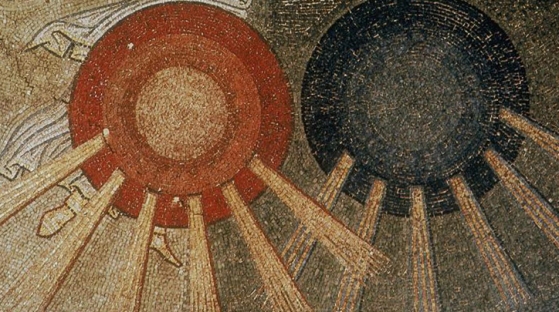 In the Second Book of Enoch (a.k.a. The Book of the Secrets of Enoch or Slavonic Enoch) God reveals to Enoch, the great-grandfather of Noah, the secrets of creation. At one point God explains to Enoch how he created the higher foundations of the cosmos using light from the belly an invisible being called Adoil and the lower foundations using the darkness that comes out of an invisible being called Arkhas – both of whom release their designated element under the command of God.

Before anything existed at all, from the very beginning, whatever exists I created from the non-existent, and from the invisible the visible. |Listen, Enoch, and pay attention to these words of mine!| For not even to my angels have I explained my secrets, nor related to them their origin, nor my endlessness, as I devise the creatures, as I am making them known to you today. For before any visible things had come into existence, I the ONE, moved around in the invisible things, like the sun, from east to west and from west to east. But the sun has rest in himself; yet I did not find rest, because everything was not yet created. And I thought up the idea of establishing a foundation, to create a visible creation.

God explains to Enoch how the visible and the invisible come down from the very lowest darkness.

And I commanded the lowest things: “Let one of the invisible things descend visibly!” And Adoil descended, extremely large. And I looked at him, and behold, in his belly he had a great light. And I said to him, “Disintegrate yourself, Adoil, and let what is born from you become visible.” And he disintegrated himself, and there came out a very great light. And I was in the midst of the |great| light. And light out of light is carried thus. And the great age came out, and it revealed all the creation which I had thought up to create. And I saw how good it was. And I placed for myself a throne, and I sat down on it. And then to the light I spoke: “You go up higher than the throne, and be solidified |much higher than the throne|, and become the foundation for the highest things.” And there is nothing higher than the light, except nothing itself. And again I bowed myself, and I looked upward from my throne.

God summons from the very lowest things a second time, so that Arkhas, both heavy and red, should come out. 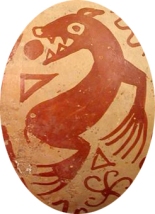 And I called out a second time into the very lowest things, and I said, “Let one of the invisible things come out visibly, solid. |And| Arkhas came out, solid and heavy and very red. And I said, “Open yourself up, Arkhas, and let what is born from you become visible!” And he disintegrated himself. There came out an age, dark, very large, carrying the creation of all lower things. And I saw how good it was. And I said to him, “Come down low and become solid! And become the foundation of the lowest things!” |And it came about.| And he came down and became solid. And he became the foundation of the lowest things. And there is nothing lower than the darkness, except nothing itself.

And I gave the command: “Let there be taken some of the light and some of the darkness.” And I said, “Become thickened, and be wrapped around with light!” And I spread it out, and it became water. And I spread it out above the darkness, below the light. And thus I made the solid waters, that is to say, the Bottomless. …And I saw how good it was. And I made a division between the light and between the darkness, that is to say, in the middle of the waters, this way and that way. And I said to the light that it should be day, and to the darkness I commanded that it should be night. And Evening came, and again morning came, that is the first day.

Scholar James H. Charlesworth provides some excellent insight  into these two beings in his notes of the above translation: [1]

The name Arkhas invites identification with Gk. arkhe, not unexpected in cosmology. Arkhe is one of the most fundamental concepts of pre-Socratic physics, and it remained in currency right down through the Neoplatonists. The ending -as, however, which is not Slavonic, poses a doubt. The plural is met when two or more primal beings or substances are in mind; but the translator of 2En knew to render this literally as “beginnings.” It is worth noting that Damascius, last of the pagan Neoplatonic philosophers, quotes from the Babylonian creation epic and identifies the two ultimate principles of Babylonian cosmology, the primal water elements, Apsu and Tiamat (abyss), as arkhai. But the Bible could have supplied the vocabulary of this section. Thus Prov 8:22-26 mentions arkhe (twice) as well as tas abyssas. On the other hand the spelling Arukhas suggests a Heb. word aruk, “extended”; but it is not a creation word.