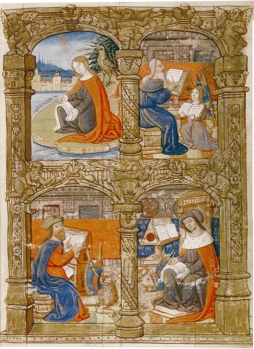 The Gospel writers according to Church tradition: St. John with his eagle on Patmos, St. Matthew with his angel, St. Mark with his lion and St. Luke with his ox (16th century manuscript)

Of the 29 texts that make up the New Testament, most had their authorship attributed to the disciples of Jesus, or at least their immediate followers. As with the Old Testament this is often apparent simply from the title of each work; according to tradition, the gospels of Matthew, Mark, Luke, and John were written by Matthew, Mark, Luke, and John, the letters of 1st and 2nd Peter were supposedly written by the apostle Peter, etc. However, also like the Old Testament these attributions have been determined false by most biblical scholars and, as I’m about to argue, should be classified as forgeries in certain cases. The exceptions are a number of letters by the apostle Paul plus, arguably, the Book of Revelation by an author named John (though highly unlikely to be apostle John).  END_OF_DOCUMENT_TOKEN_TO_BE_REPLACED